With the end of the year soon coming to a close, many of us might be covered in snow which means we should probably just face it that it’s Winter. That doesn’t have to mean drudgery, especially when you think about spending the colder months in a cozy modern cabin designed and built for the elements. We looked around and found ten modern cabins we’d love to hunker down in to get through the next few months. 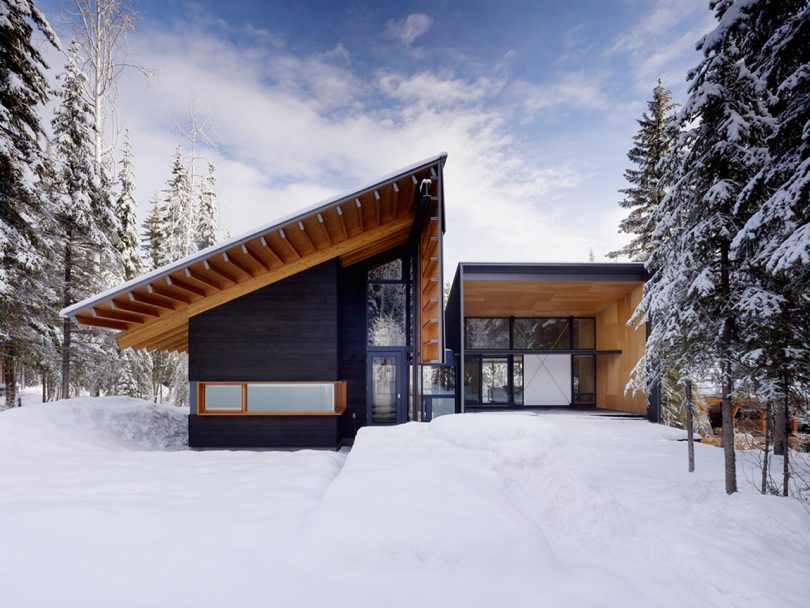 Located adjacent to Kicking Horse ski resort in the Canadian Rocky Mountains, the Kicking Horse Residence was designed by Bohlin Cywinski Jackson as a family weekend getaway built for some amazing skiing. 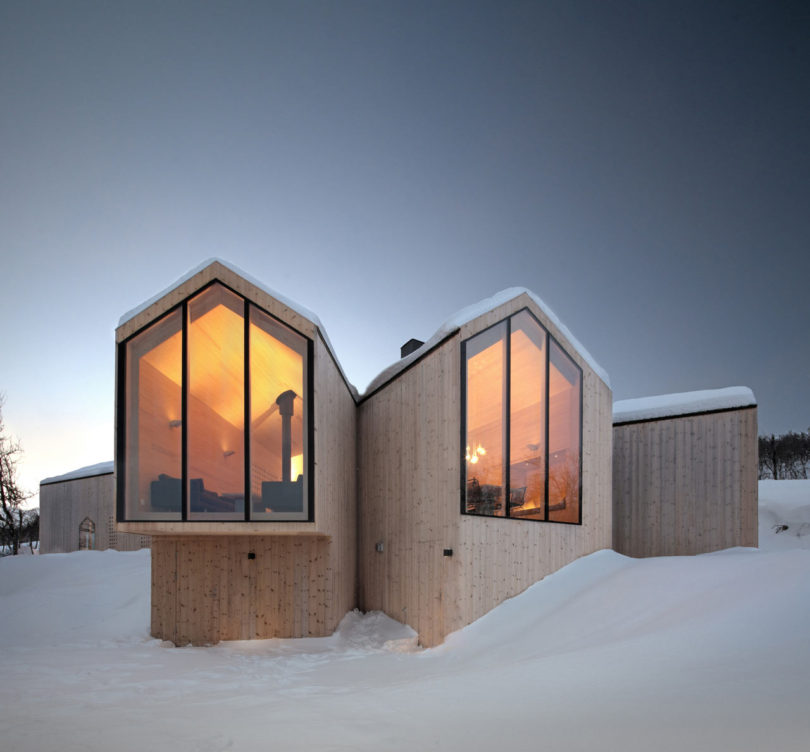 Designed by Reiulf Ramstad Arkitekter for a family of four, the Split View Mountain Lodge is a holiday home near the village of Geilo, Norway. The main volume splits out to form additional annexes that frame individual views of the surrounding mountains. 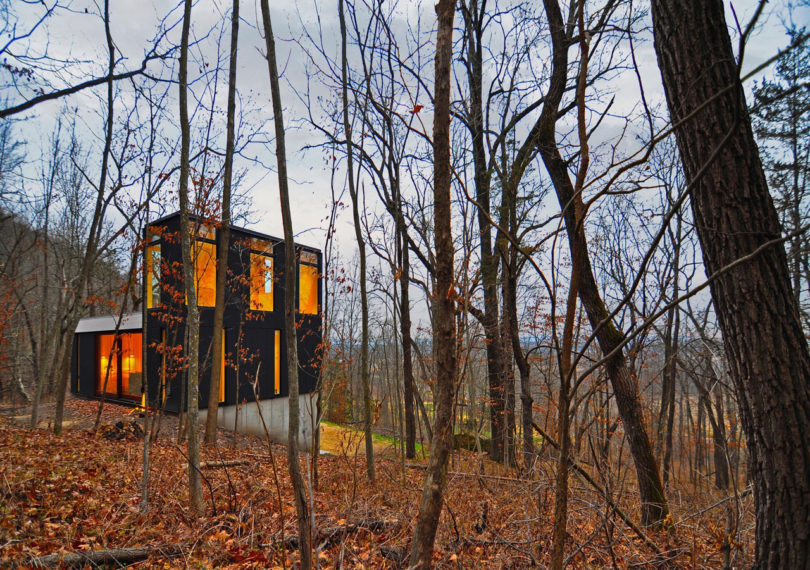 Johnsen Schmaling Architects designed the modest Stacked Cabin in a remote Wisconsin forest. Working with a tight budget, they kept the structure simple and minimized the footprint by going vertical and carving into the sloped site. 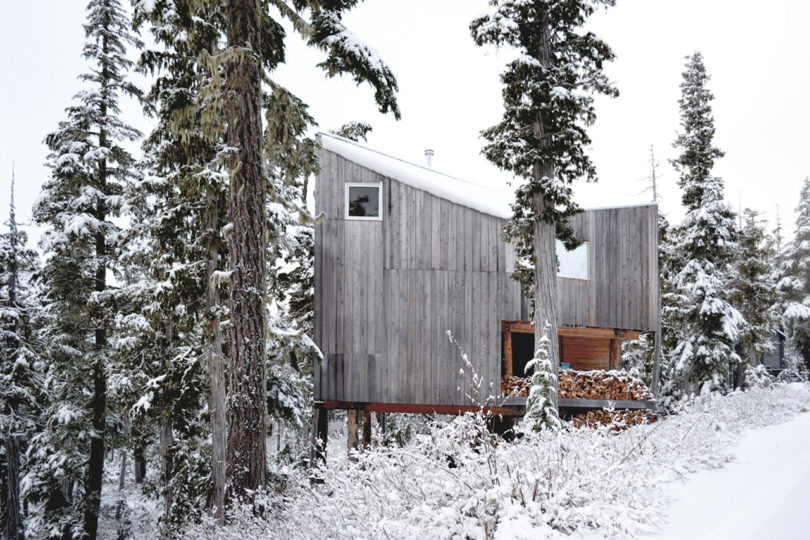 The Alpine Cabin, designed by Scott & Scott Architects, is located in the remote north end of Vancouver Island, a prime area for snowboarding, sitting above ground to accommodate the accumulation of snow. Its exterior has a raw look with its cedar panels that have weathered over time, matching the colors of the surrounding forest. 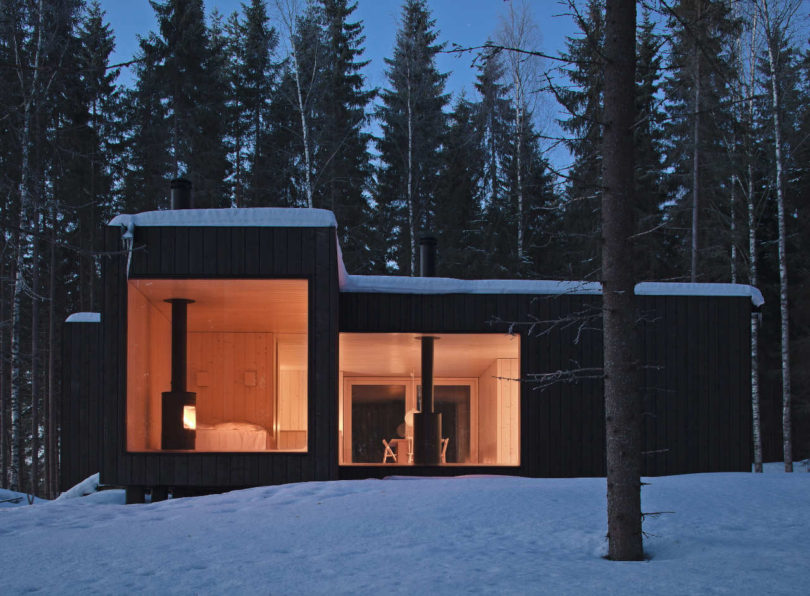 Shaped like a cross, the Four-cornered Villa offers four different views of its location on an island in Finland. Avanto Architects created a black exterior, dotted with large windows, to make it invisible from the nearby lake. 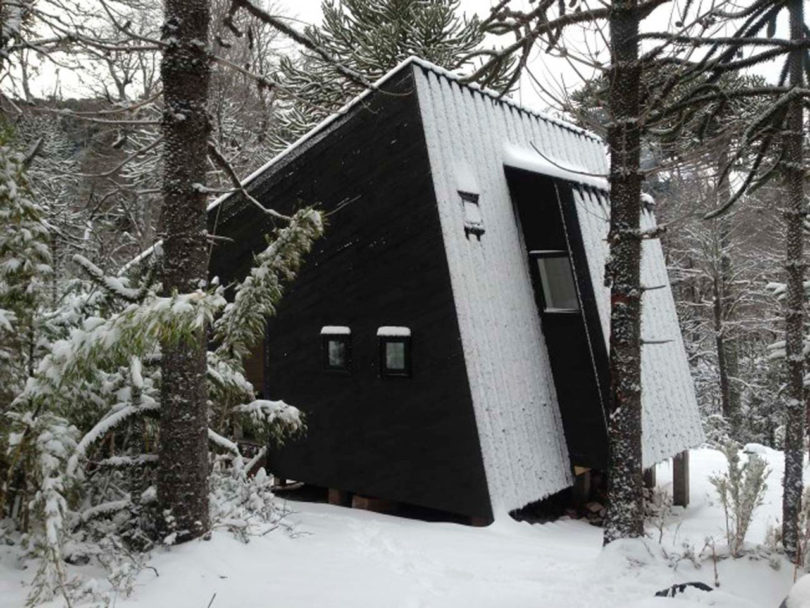 This winter retreat located in a forest in the Araucanía Region of Chile was designed by MC2 Arquitectos to face a small waterfall. One side features a large window, while the other walls has smaller windows that focus on specific views and provide ventilation for the house. Its painted brown exterior helps it blend into the surrounding landscape. 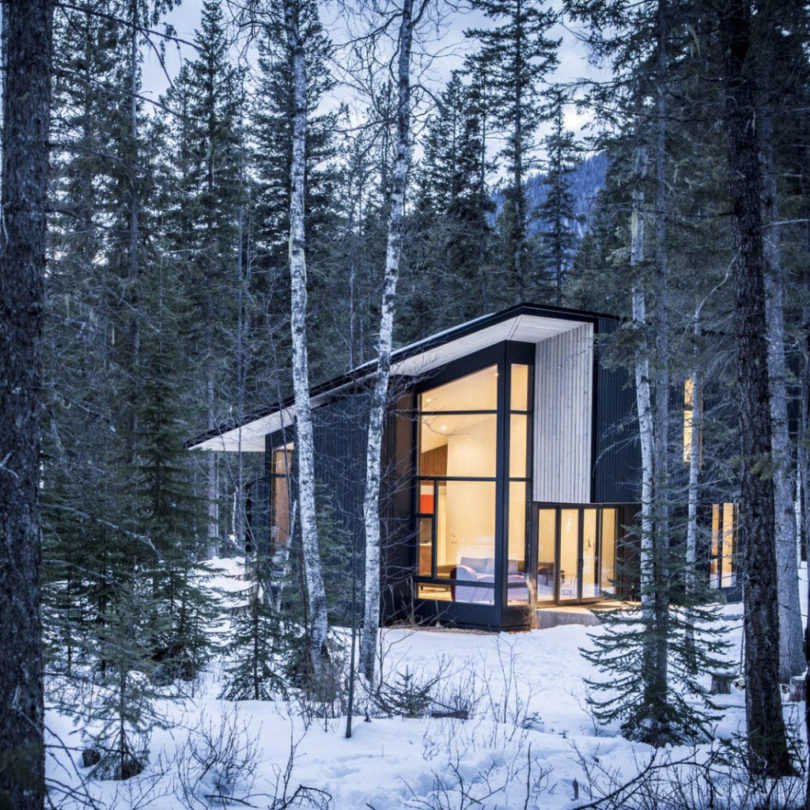 Form & Forest have designed the ultimate modern cabin that you can actually rent! Surrounded by wilderness, the retreat sits on the Blaeberry River near Golden, British Columbia with vaulted ceilings in the living room that afford incredible views of the forest, mountains, and river. 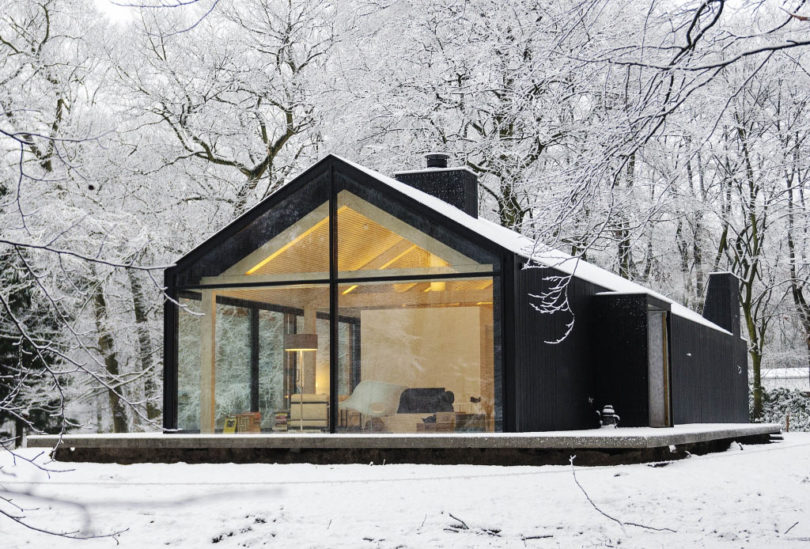 Oisterwijk Brouwhuis was designed by Bedaux de Brouwer Architecten and its finished structure resembles an elongated barn in the forests of Oisterwijk. The pitched roof makes way for a window wall that covers one entire end of cabin. The exterior is clad in black-stained wood, which matches the wooded forest and contrasts with the snow. 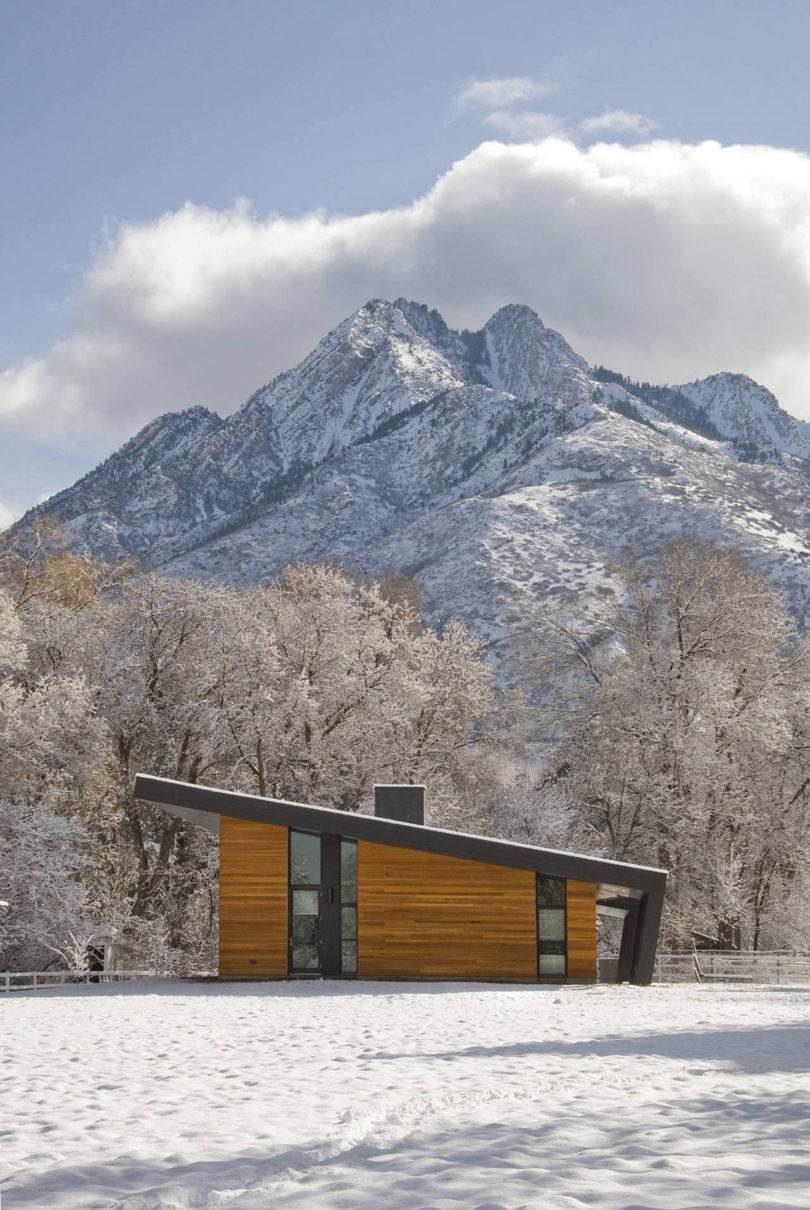 Pasture Project is built on a pasture in the shadows of Mt. Olympus in Holladay, Utah by Imbue Design. With a focus on using minimal energy, the home’s living space is situated with a north/south orientation to aid in winter heat gain and summer protection. 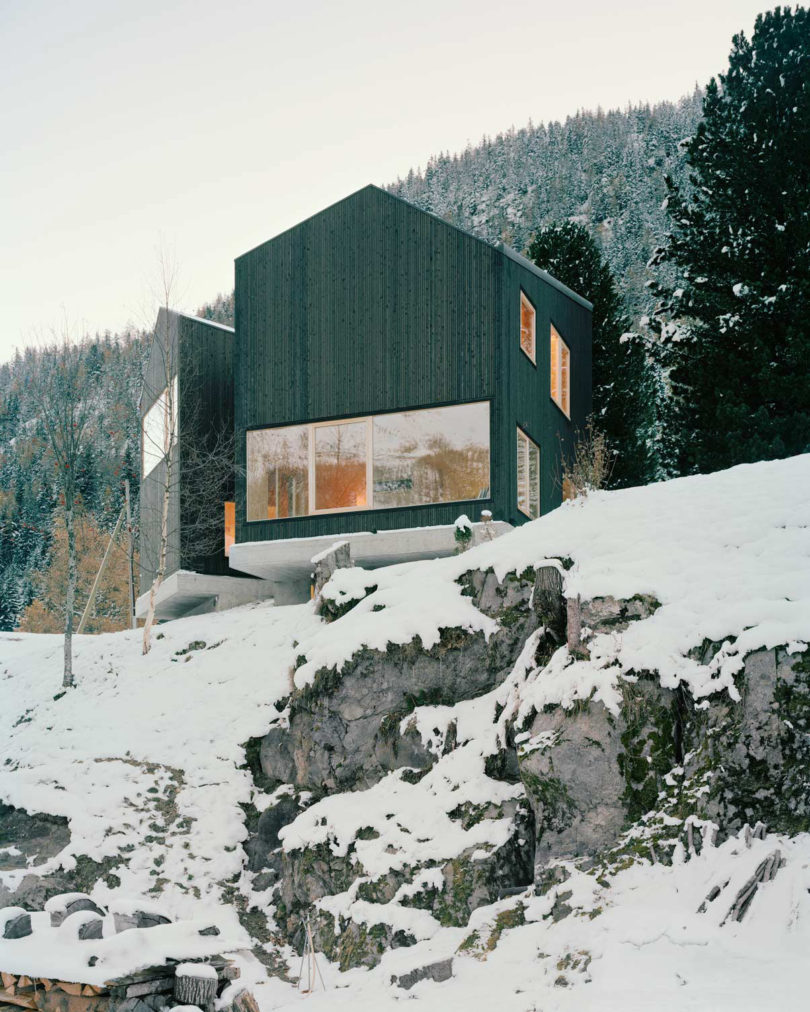 Lacroix Chessex Architectes realized La Maison aux Jeurs, a cabin in Les Jeurs, Switzerland situated on a rocky hill above the road. The structure is divided into two volumes that are angled 45 degrees apart with a connection on the mountain side. Both volumes are designed with different views of the valley below.