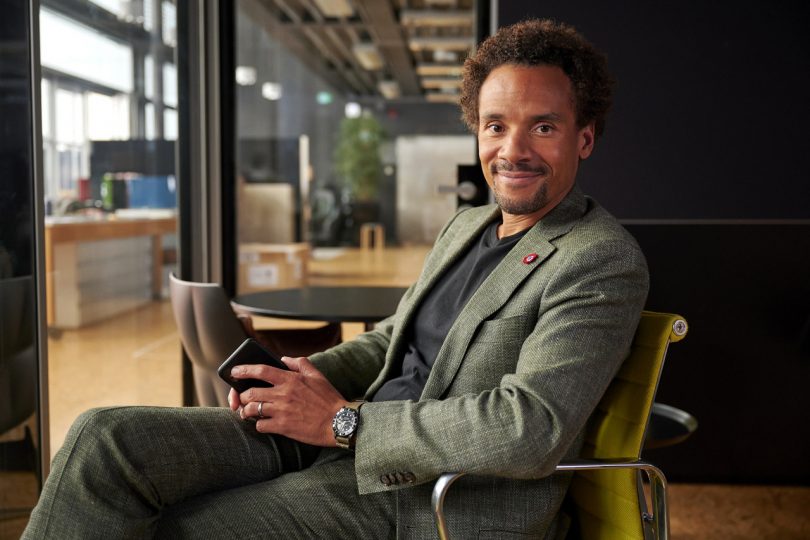 Like many ensconced within the automotive industry, Oliver Heilmer’s history with cars began well before his entry into the vocation of designing automobiles. “Ever since I can remember, cars have totally fascinated me,” recounts Heilmer, “I’ve always drawn cars – and always had a big smile on my face at the same time. It started with scrawling extra spoilers onto photos of cars in magazines when I was a young kid.”

Those formative years would lay down the foundation from which Heilmer would springboard from as a creative wunderkind, first with BMW Group’s Advanced Design team in 2000 before being promoted to BMW’s Head of Interior Design in 2013. He’d soon thereafter assume the role of President of Designworks, a BMW Group Subsidiary where he was tasked to oversee all three design studios across North America, Europe and Asia. In 2017 Heilmer would join MINI as the brand’s head of design, his talent tapped to identify both the dots of the present while connecting them with the purpose of shaping the future. 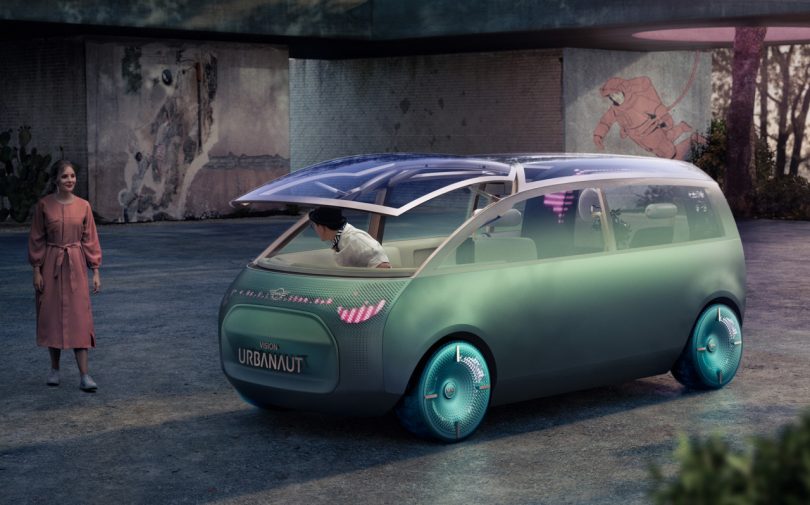 Nowhere is Heilmer’s efforts to reinterpret MINI’s heritage for future generations more evident than the brand’s electric-powered MINI Vision Urbanaut, an experimental mobility solution daring to reimagine automobiles untethered from many of the norms associated with the cars on the road today.

Characterized by its aerodynamic legume silhouette and room/womb-like interior, the MINI Vision Urbanaut envisions mobility as an extension of lifestyle activities, one appointed with physical and technological amenities borrowing heavily from the home.

We spoke with Oliver Heilmer to discuss some of the specific details and encompassing principles behind the MINI Vision Urbanaut. 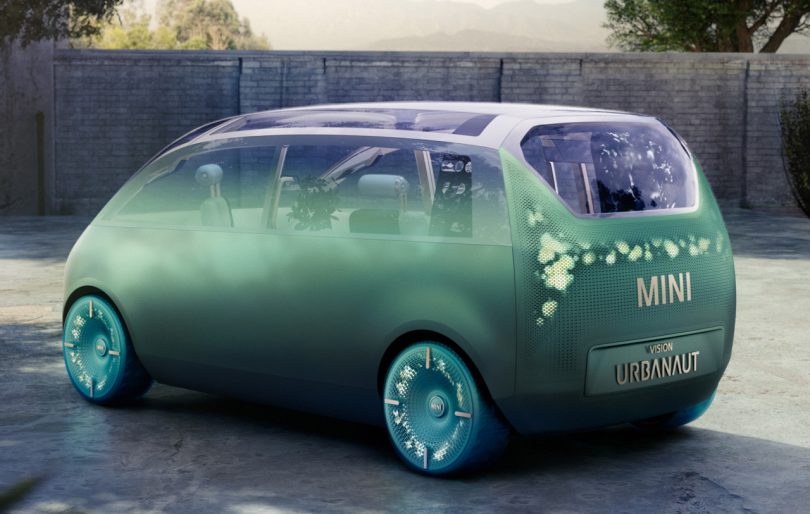 The Vision Urbanaut looks strikingly different than other previous concept designs from MINI. Does MINI envision developing electrification/autonomous technology as an opportunity to reboot the brand for a new generation without ties associated with MINI’s past?

I believe that the relationship with its origins must always endure in terms of visual identity and branding. However, reinterpretation is also the nature of this connection and time. For me, as a designer, there is no either-or. It is an “and”. But it’s also true that many younger generations only know the BMW MINI, the 2001; which also appeals to being cute and desirable. I thus don’t see any difference in the way the original MINI is perceived. The heritage connection will remain, but at the same time, the brand is growing.

There has been much made about the evolution toward electric drivetrains and “skateboard” platforms, with the MINI Vision Urbanaut strongly illustrating the maximization of usable space – a “living room on wheels” experience? How far do you believe we are from this becoming a reality?

We began developing the MINI Vision Urbanaut at the end of 2018, returning to the origins of MINI and questioning the status quo. Our key questions were: how could mobility possibly change, and how will MINI besides our core products grow as an urban brand and participate in this change? If you take a closer look at Generation Z, you notice their different outlook on cars itself. They tend to fix their preloved vehicles themselves or have them professionally customized, creating small personal dreams – everything represented within the MINI Vision Urbanaut.

Therefore, the Urbanaut is an answer to how to occupy and use space in an urban environment. As of right now, the concept is more of a rough projection of the year 2030. It is conceivable that in 10 years, the need will grow, and the market will be ready – of course, we cannot predict that. 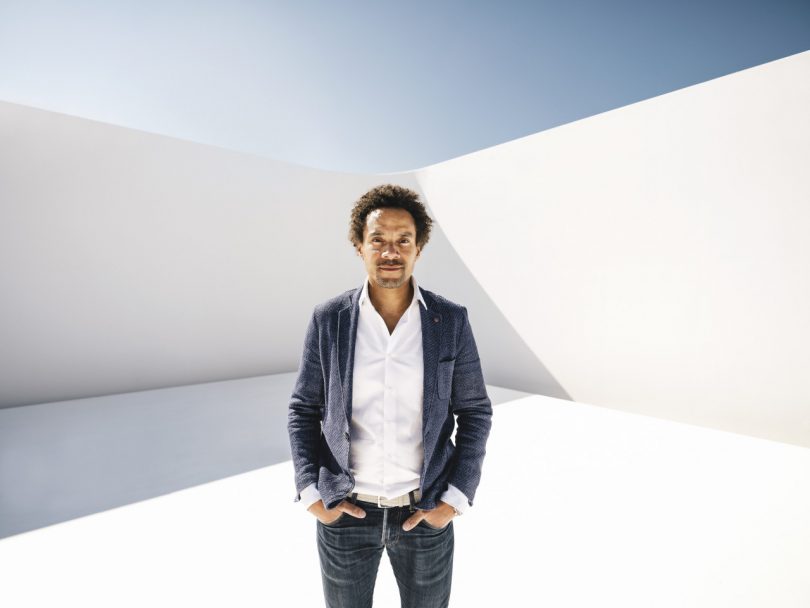 Okay, how about aesthetically? Do you see the possibility of more novel and even “weird” production vehicles once designers are liberated from the conventions and safety requirements imposed by the combustion engine?

First, there is the engine, one factor influencing the proportions and how we develop the vehicles in terms of aesthetics. However, the significant leverage would come, and I consciously say ‘would’, if cars are no longer involved in accidents due to fully automated safety features. Thus, if the “crash” issue is solved, we enter another level of design possibilities, less bulky than today, which is necessary due to regulations and requirements.

Today such a vehicle has no chance in a car crash. Designing differently than we do today is possible if that aspect is solved – we assume. Indeed, we would see a greater variety of cars, like in the 1970s when many different forms coexisted, all very distinctive and persuasive. 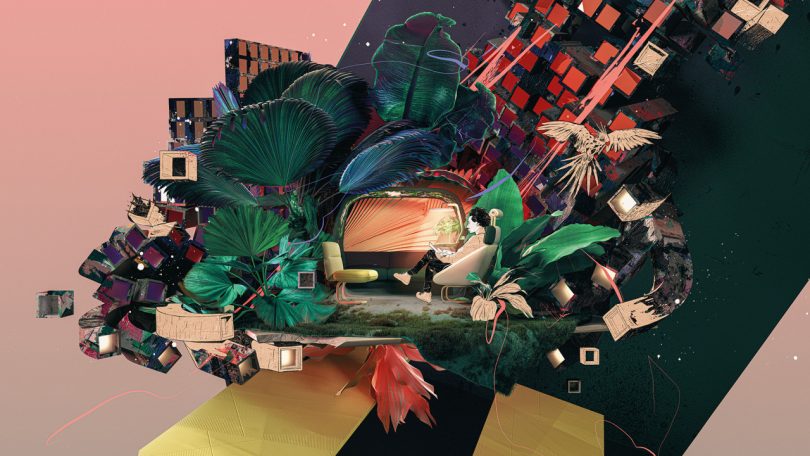 A big part of the MINI Vision Urbanaut’s vision revolves around the pre-programed atmospheres of Chill, Vibe and Wanderlust activated using a physical token. Were there specific research/studies supporting the ideas specific to these environmental modes?

Generation Z wants to be on the road ideally with their own vehicle. In Japan, for example, an internal study analyzing the user behavior of our DriveNow fleet shows that people book vehicles but don’t move them. Subsequently, we found that people use DriveNow differently. They book a personal space for a special moment, e.g., to eat, read, or talk on the phone in privacy. Clearly, this conclusion differs from culture to culture and individual needs. But in Japan, a country with smaller flats and a shortage of personal space, we have noticed this phenomenon. 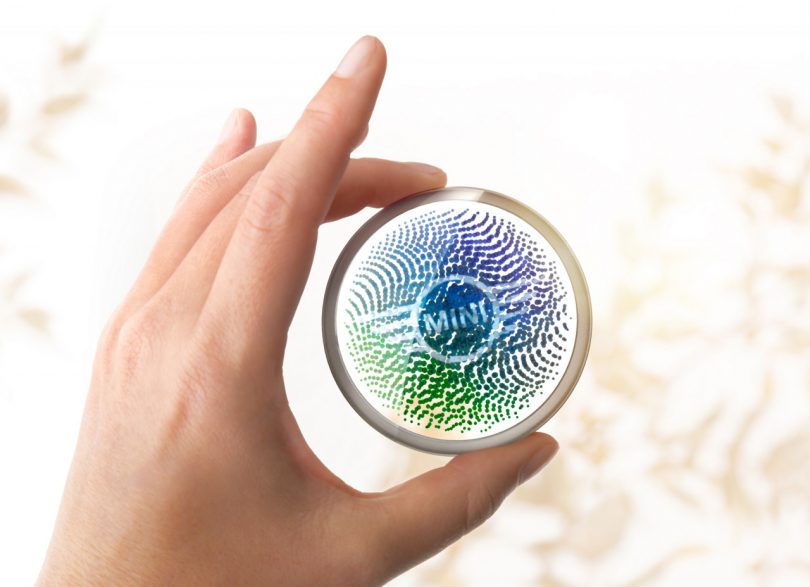 I like the tactile and physical nature of the token, but also question whether a physical token would be preferable over using an app or using a wearable to activate these scenarios. Why the abandonment of tactile buttons and switches within, but the inclusion of a token?

For us, the haptic experience is and remains essential in designing the next MINI generation. The MINI Vision Urbanaut and its Token is a big step forward in this context. Therefore, we wanted to create a hand charm that carries your personal virtual ID but is not proof of the brand. Our goal was to think outside of the box regarding the theme “car key”; plus, we looked for a way to make a key that is not just a key and with fewer references to technology.

So, for now, it is this form, but it could be a bracelet or amulet that you wear around the neck. Something that you have an emotional attachment to and take it with you. This sets a Token apart from a key – it’s an entirely different kind of manifestation of your personality. But primarily, it’s supposed to replace the key. Of course, there will still be mobile device and app themes in addition to this Token. That all coexists.

And yes, the Token seems analogue at first. Yet, the intelligence behind it is hidden, very sophisticated. It represents a new interaction level, much more straightforward, without technological overkill. 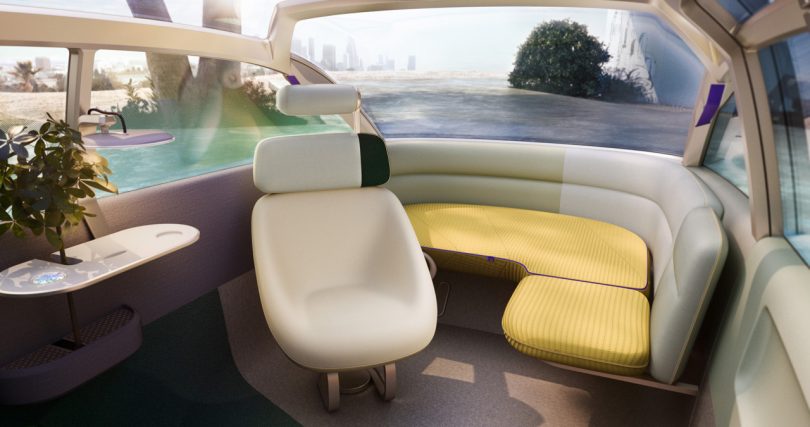 Tell us about the swivel seating and daybed combination, alongside the floor treatment, which seems evocative of a rug.

We’ve built the swivel seat already several times; the mechanics are entirely documented in detail – to be frank– we could implement it directly if we develop the Urbanaut in 3D. The floor includes two zones – one area towards a Cozy Corner, where we use carpet.

The Cozy Corner shows the idea that we understand the MINI Vision Urbanaut as an external habitat, including sitting or lounging on the rug, as we do at home. Of course, the color tones and character of the carpet reflect this idea, too. It should invite you to make this space your own; it’s not a footwell in the car. The other zone is the front, where the driver sits; we used cork. A functional choice, plus we wanted to create a proportion of surfaces that naturally improve the climate inside. Cork has this quality; it absorbs excess moisture and successively releases it later – a non-tech air conditioning. 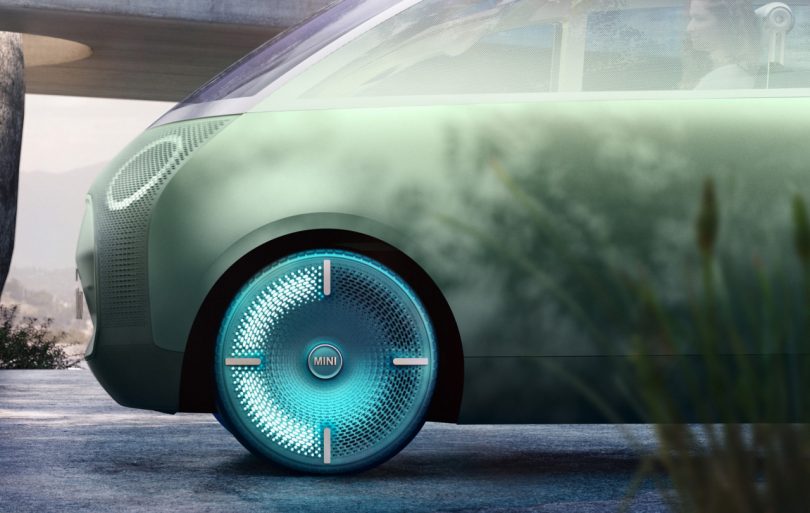 As a designer, what’s a MINI Vision Urbanaut detail you feel strongly about that you most hope makes it into future MINI vehicles?

From the perspective of the icon, of course, the round center display. But I’m also amazed by the wheels. It is an entirely different aesthetic in which we embrace the skateboard theme. Skateboarding is more than merely a sport. It’s a lifestyle. This part is emblematic of lightness, so I would like to see us achieve that at some point.

Returning to the realities of today, how does MINI envision this concept study predictive of the habits/activities of the public in a post-COVID world?

The pandemic transformed the value of the MINI Vision Urbanaut. Today we perceive a car as a protected space where we move from A to B and don’t have to wear a mask. Today, that has a very different value than before the pandemic break. For example, over the summer I noticed everyone on my team was cycling. Many had stopped using public transport. Individual mobility is becoming more important because people feel safe. It’s a question of the personal circumstances, e.g. where they live and if they can afford it. But we see that people who can afford it and who have to commute due to their job are more willing to use a private car.